When I was in the Holy Land for a pilgrimage back in the spring of 2018, there was one incident that made me pray and reflect on a lot of things, especially the lesson learned from the unexpected discovery process of St. John the Baptist‘s place of birth.

It happened on a very hot day… after many trying experiences… but it was exactly the lesson that we needed to receive. Nonetheless, it was very fitting in consideration of the saint’s own life and message. Without a doubt, God, through His saints, tends to teach us very valuable lessons at times when we least expected or liked to receive them.

We were supposed to visit the charming village of Ein Karem, the traditional place where the Visitation of the Blessed Virgin with St. Elizabeth and her unborn child, St. John the Baptist, happened. The big bus had to stop at the foot of the hill (because it was too narrow and steep for it to go up) so I had to encourage our people to make a little sacrifice to walk to our destination. We were scheduled to have Mass at the Church of the Visitation; but when we arrived, there was a French-speaking group there before us. They took our scheduled time, perhaps out of naivete or ignorance, so we did not get to offer Mass. The way up to the Church of the Visitation was a long walk. It was a steep hill to climb for many of our elderly pilgrims, too. Many were tired (and grouchy) because of the hard trek; and with the added misunderstanding, I was on the edge of being angry as well. Nonetheless, I tried to control myself and keep my cool.

So, after many apologies from the other group’s main escort and tour director, she was able to talk to the Franciscan friars to find a place for us to have Mass. However, it was on the other side of the village, so we had to go down the hill and climb up on a shorter one. I was not happy at the time but accepted it as God‘s will for us. We ended up at St. John ba-Harim. The church’s courtyard has the Benedictus written in many languages. Nevertheless, we did not have time to enjoy the view because we were rushed to have Mass before the next group arrives on their schedule.

When we came into the church, I was somehow drawn to the left-hand side aisle…

I walked down the dark aisle that led to a small altar. On the bottom of the altar, there was a dimmed lit opening. I knelt down to see what was there, and there was an inscription in Latin stating, “Here the Precursor of the Lord was born.” I was dumbfounded and gladly shocked. Why? The Precursor is my Confirmation Saint!

I was amazed that this one, unexpected, and unidealistic incident taught me so much. 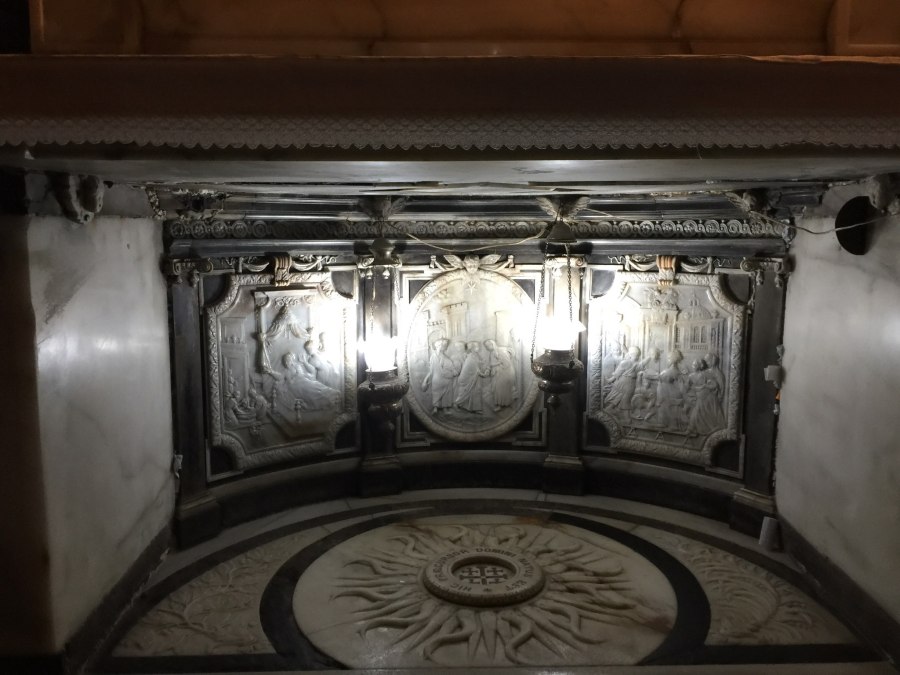 First, he taught me that God always leads us to unknown journeys beyond what we have planned. Furthermore, those journeys are not always pleasant and easy; and many times, they challenge us deep from within. Nevertheless, those adventures always help us grow if we are open to life and its valuable lesson.

Second, I found that St. John the Baptist, even though was a strong, just, and admirable figure in the Sacred Scripture, his birthplace is very humbling — just like our Lord. As a matter of fact, the indicated mark of his birthplace was not even at the center of the Church or at the main sanctuary. It was on a dark, dimly lit side aisle that leads to a small altar. Hence, that day, my Confirmation saint taught me the lesson of nothingness.

He reminded us that Christ must increase and we must decrease. (cf. John 3:30) This is one of the hardest but most liberating lessons that we can learn as Christians! It is so hard to let go of our natural desires to be in the spotlight as to be somebody instead of just being a nobody. It really takes a real understanding of one’s self belonging to the Lord instead of trying to make a name for ourselves. It takes humility to know who we are and our mission to lead people to Christ instead of us. In a world of secular powers and popular opinions, many Christian followers and leaders have fallen into the trap of using God‘s name and their talents to build their own kingdoms and glories, hence making themselves idols and their followers toward the point of idolizing them.

Instead of paving the way and pointing people to Christ, we make people come to us, and that is a very real temptation and dangerous reality that exists in our midst. Hence, the Baptizer taught us the valuable lesson of nothingness as to lead people to Christ Jesus and make ourselves insignificant so we can become His instruments instead of being the main actors and movers of things.

St. John the Baptist spent much time in silence in the desert. He was connected with God and lived as He was called to be. He zealously preached repentance and conversion of heart because he knew his mission was given by the Almighty to prepare the way of Christ. Even though he did not know at first who Jesus was, perhaps from a long time of separation as they lived their individual lives, he was attentive and saw the Spirit descended upon the Chosen One, and that was why he said, “Now I have seen and testified that He is the Son of God.” (John 1:34)

In many ways, each and every one of us is called to be like St. John the Baptist, to prepare the way of the Lord; but most important of all, to be attentive to His presence when He comes to us. Nevertheless, we have a greater mission than he, too, because we are disciples of Christ! He had done the mission given to him to prepare the way, but we still have the mission to be apostles — the ones who are “to be sent out” in the name of the Lord Jesus Christ — to preach the Good News to the whole world.

Perhaps, facing such challenges, we can only say, “Here I am, Lord; I come to do you will.” (Psalm 40:8-9) This invites us to be humble and to stand silently and honestly before God in order to tell Him that we need Him, not having Him do things our ways but to surrender to Him. We have to stop asking for what we want and ask Him to perfect us in love, to love Him more and more, to allow Him to model and form us as clay in His hands, and to bring to fulfillment what He has begun in us. Without our docile surrendering to Him, we will remain as hardened clay that cannot be formed.

The easiest — but hardest — thing is that we have to let go, little by little, of our miserable sentiments and self-pities to become more capable of having the same sentiments as those of Jesus. It is necessary to die to ourselves in order to become like the Son of God with simple, childlike, and trusting faith, hope, and love. Simply put, let us be disciples to pave the way to the Lord and preach the Good News with our very own lives.

We all need prayers. If there is something that I can pray for you, please let me know via the Prayer Request page. It is my honor and duty as a priest to pray for you and with you! I ask that you keep me in your prayers as well.

Are we tired and burnt out by the things of this word? What will be the legacy and inheritance we pass on to the next generation? #catholic #mondaymotivation
Proud of my community and their service to those who are in need! We served a very delicious home-cooked meal to many and they all loved the care our people put in it. I am proud of Catholic faith being enlivened in service. ✊🙌☝️
Finally found time to watch the cinematic rendition of a priest’s life (Father Stu)… Even though it might not be for everyone, it has a good, down to earth message. While it might sometimes take a lady to bring one to the Church, it has always been Our Lady who helps one find and persevere in their vocation in answering His call. May we never be short in giving our very own self to Him, no matter how imperfect we might seem to be.
#Catholic #homily by Fr. Khoi V. Tran on Saturday, June 25, 2022 — an "I Thirst" (John 19:28) #podcast — available at podcast(dot)ithirst(dot)us or any popular podcast services #ithirstus

ⓒ 2016-2022 Rev. Fr. Khoi V. Tran. All rights reserved. Proper citations and references are appreciated. Written permission can be obtained via email or an appropriate mean of communication. Privacy policy and terms of service are stipulated and managed by WordPress.